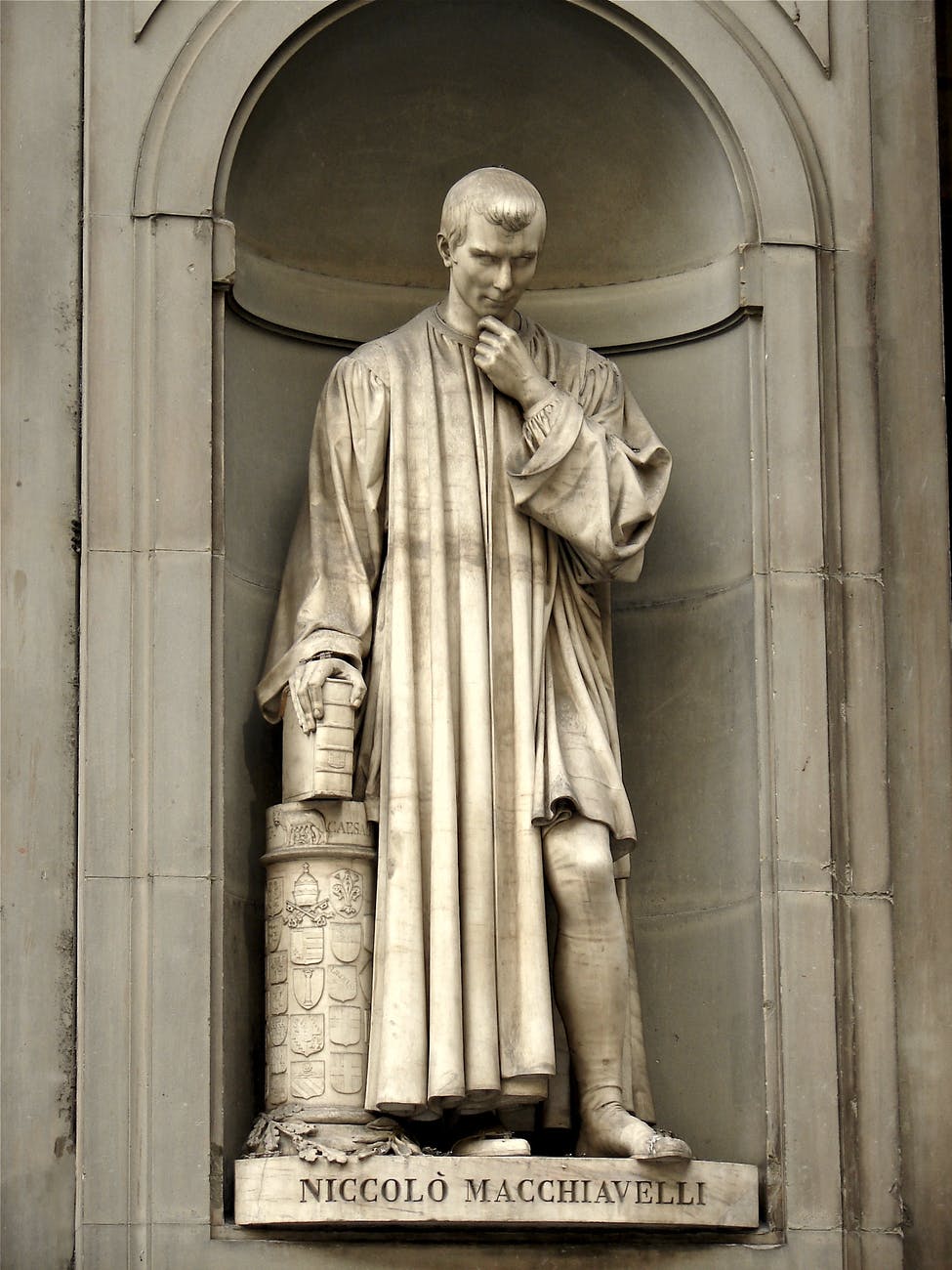  B. K. Sarkar says, “Denuded of all extraneous particulars, Machiavellism may be boiled down to two cardinal
dicta: (1) the enemy, actual or potential, must be crushed at all costs. And here end justifies the means. (2) The
manner in which a person behaves as the servant of a group, party or state must be different from that in which
he appears as an individual in regard to other individuals. He adds that both these principles are quite natural.
And he argues that these principles are also at the basis of the Arthashastra teaching.
 W. Ruben, who has also made a detailed comparison between Kautilya and Machiavelli, argues that the standpoint of both is that of ‘Real politics’, and hence according to both the statesman has to be dishonest,
unorthodox, impious and egotistical, although at the same time he must be self-restrained and active (that is,
not fatalistic). He also refers to the occasionally relentless frankness and clear-headedness and harshness of the
politician reflected in the works of both.
 Both realistically analyse the methods by which a king may rise to supreme power and maintain it against all
odds.
 In both, we find the duality of treatment of the feelings and susceptibilities of men and the tendency to
legitimize force and fraud in the interest of the State.
 For, both the authors, the State, vis-a-vis the interest of a person are paramount.
 Both of them held the belief that, through a proper and critical study of history, one could deduce not only the
causes of maladies of society, but also the cures thereof.
 Kautilya belonged to the Arthashastra School which looked at the political phenomenon without linking them in
any way with divine agency or revelation. The approach was thus religious and rational. The Modern Italian
thinker affected a break with the medieval way of thinking and reasoning and adopted the empirical or historical
method of investigation and released the State from the bondage to religious authorities.
 Kautilya is aware that the Swami (king) can hardly feel secure in a State where persons cut off of power by him
are still alive and well. Similar insistence was that of Machiavelli while cautioning the Prince against any possible
conspiracy and scandal.
 Both Kautilya and Machiavelli advised the ruler to be merciless, cruel and unscrupulous while suppressing
internal disruptions and external aggressions. The former provided different kinds sanctions which coercive in
nature and punishments prescribed by him were stringent and cruel. But Machiavelli, while elaborating the
theme of the art of war, did not mention cruel techniques like blinding through the use of poisonous powders
for attaining political goal. Kautilya surpassed Machiavelli and left him for behind while sanctioning several
barbarous and cruel measures for attaining success.
 No ethical code supports Kautilya’s methods for swimming success. For the sake of the country’s security all
kinds of measures including violence and fraud were welcome and they could not be considered as
reprehensible. This is what both Kautilya and Machiavelli advocated. To them, end justified the means.
 Both Kautilya and Machiavelli were quite pessimistic in their approach to human nature. It seems that the
former treated men with contempt as they were unreliable and entrust wrongly. Hence they should not be taken
into confidence. Kautilya, however, made “no categorical statement regarding the corruptibility of human nature
in general”. Machiavelli, on the other hand, categorically said that people were ungrateful, fickle, deceitful
avaricious, vicious, evil, mean, corrupt and unreliable. He, therefore, suggested that there should be strong
political force to restrain the deviant behaviour of the people. He upheld a more pervert conception of human
nature than Kautilya. He considered men to be greedy, selfish and cruel. They understood only the language of
force. Kautilya now here made a generalized statement about the weakness or perversity, or selfishness of man.

 Machiavelli’s empirical method, founded on historical data, has no equivalent in Kautilya’s casual references to
classical ancient times. Machiavelli’s application of history to point a moral is different from Kautilya’s
dependence on scriptures and conventional wisdom for reinforcing the traditional moral order.
 While Machiavelli occupies as the first modern political philosopher a unique position in European history,
Kautilya was preceded in Ancient India by a long line of individual authors and schools who may justly claim to
have introduced a number modernist political ideas into the stock of our ancient thought.
 The detailed account of the organization and working of the State-administration which constitutes such a
prominent feature of Kautilya’s work is wanting in Machiavelli’s statecraft.
 The more fundamental difference lies in the objectives of the two sets of policies formulated by them.
Machiavelli was motivated by a burning patriotism to see Italy rise again from the ashes into a modern nation for
the deliverance of the unhappy land from decay. Kautilya, on the contrary, was aspired to ensure the security
and stability of the kingdom so as to achieve Dharma on the globe. Kautilya’s major preoccupation, unlike that of
Machiavelli, was to foster and restore the ethical values of Indian system both in method and in principle.
 Kautilya’s essentially spiritual disposition and Machiavelli’s essentially secular material makeup stand out against
each other. Though both believed and prescribed to the rulers the rules of the game of politics, the use of
religion for political ends, their grounds for doing so, as also their concepts of power and goals, were mutually
exclusive.
 Kautilya also does not wholly subscribe to the view of Machiavelli that man is born badly and has no inherent
virtue in him. That he is a “compound of weakness, folly and knavery, intended by nature to be the dupe of the
cunning and the prey of the despotic”. On the contrary. Kautilya admits that man has altruistic and good
qualities alongside some selfish and bad traits. He thus, does not endorse the view of Machiavelli that man is
thoroughly bad and wholly selfish. To him, a man, apart from being selfish and leaning is altogether rational and
is, therefore, advised to follow a code of conduct on Dharma and to adopt immoral means to deal with cunning.
 There is fundamental difference between the kingship of Kautilya and Machiavelli. As for Machiavelli, he left the
personal and private character of the Prince of his upbringing out of sight, and treated him as the personification
of the State, wherein the private individual is inevitably merged in the politician. On the other hand, Kautilya’s
characterization of the king was by self-control, wisdom, discipline and noble conduct. What is most significant is
Kautilya’s priority to Dharma over Danda. While Machiavelli argues, “it is not necessary for a prince really to
have virtues, but it is very necessary to seem to have them”, Kautilya, King’s departure from moral norms was a
temporary expedient for those moral norms. The king was expected to be a virtuous person in thought, word
and deed. If he had to be cruel by necessity, it was to make virtuous life possible for all.
 While Machiavelli singles out the class of aristocrats as the object of his ruthless policy, their place in Kautilya is
taken by antisocial elements of the population and the clandestine public enemies and the enemies outside.
 So far as the ultimate objective of the State is concerned, Machiavelli did not think much of the populace, the
welfare of the less privileged did not bother him, as these concerned Kautilya. The majority of citizens to
Machiavelli were content with the security of person and property that the State provided them. He glorified the
State and stressed the over-riding claim of the State to the loyalty of the individual. He would not concede that
man had any right over and against the State. Man attained his optimum development through subordinating
himself to the society, held Machiavelli, and that the State provided a political framework essential to the
development of mankind. On the other hand, to Kautilya. The State was subordinated to the society which it did
not create, but which it existed to secure. The highest office of the State is, thus an aggregate of the people
whose welfare is an end in itself.
 A more fundamental difference may be observed between the objectives of the two sets of policies. In
Machiavelli there lay behind all his thought the urge of burning patriotism which sought passionately for the
deliverance and unification of his unhappy motherland .The aim of Kautilya’s statecraft, by contrast, was much
more limited and selfish, for it consisted in ensuring the security and stability of the King’s rule inside the
Kingdom and its progressive advance towards the goal of universal dominion outside the same.

 Machiavelli has tried to separate ethics from politics but the two cannot be really divorced because the state is
founded on the minds of its citizens who are moral agents. A good man will be a good citizen only in a good state
with good laws.
 Machiavelli builds his theories on the assumption that man is bad and selfish by nature. This is wrong. Man is a
bundle of good and evil. It is the environment that converts him into good or bad. The ruler being one of the
individuals of the society cannot be set apart from the environment having quite different standards of morality
from the rest of the people. The idea of right and wrong which represents the ethical standard of the people
must also affect the actions of the rulers and their orders. Rulers’ actions must reflect the moral opinion and
beliefs of the people. Hence what is morally wrong cannot politically be right.
 If rulers’ actions are not judged by the standards of private morality, he may assume dictatorial powers.
Separation of ethics from politics may ultimately result in tyranny which a democratic minded man will never
tolerate. Machiavelli’s theory of moral indifference, therefore, leads towards the usurpation of individual’s rights
and liberties and the negation of his will.
 His theories were not developed in a systematic manner, they were mainly in the form of remarks upon
particular